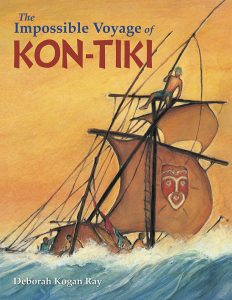 The Impossible Voyage of Kon-Tiki

Thor Heyerdahl was convinced that ancient Incans traveled a 5,000 mile journey from South America to the South Pacific by raft. Impossible! That’s what everyone told him when he spoke of his theory.

He was determined to prove them wrong. In 1947, Thor Heyerdahl and a five-man crew travelled to Peru, built a raft out of trees, and set sail on the Pacific Ocean headed for the Polynesian islands of the South Pacific. It wasn’t that easy, however. Thor researched his theory for more than ten years, he worked with New York’s Explorer’s Club to raise funds for the journey, with the United Nations to get international clearances, and with the U.S. Navy for equipment.

It was a dangerous journey and hard on six men on a raft fashioned after an Incan log raft, but 101 days after they set sail, they landed on an uninhabited island in the South Pacific. Thor Heyerdahl proved that the journey could be done!