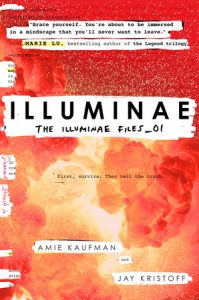 by Amie Kaufman and Jay Kristoff

One second, Kady and Ezra have nothing bigger to worry about than avoiding each other after a messy break-up. The next second, their world falls apart when a war breaks out between two competing megacorporations and their colony–Kerenza–is caught in the middle. Suddenly, Kady and Ezra are thrust into a life on the run from an enemy warship. But pursuit by battleship is the least of their worries. Their fleet’s artificial intelligence–which should be protecting them–may actually be an enemy. And a plague is slowly ravaging the fleet with terrifing consequences. As Kady plunges into a web of data hacking in search of the truth, she realizes that there’s only one boy who can help her bring everything to light…and of course, it’s her ex-boyfriend, Ezra.