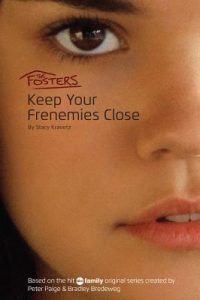 The Fosters: Keep Your Frenemies Close

As a companion to ABC Family’s show The Fosters, this first book in a potential series takes place over a weekend community service/extra school credit trip Callie is required to take in order to boost her history grade.

To complicate things, she’s thrown together with Talya and the forced relationship between Callie and Talya takes a series of turns over the course of the book. The bright spot is a new guy, Austin, who flirts with them both and stirs up even more trouble between the two. Callie and Talya reveal secrets to each other, find common ground, find confidantes in each other, and bond over the work they’re doing.

Also, the relationships with the other kids on the weekend trip — a new cast of characters which will be ongoing in the book series — both create tension as well as draw Callie and Talya together. Ultimately, they see each other as something other than rivals and find they have more in common than they’d thought. On the bus ride back home, they’re forced to consider whether this newfound friendship will outlast the weekend. Especially when the unthinkable happens.