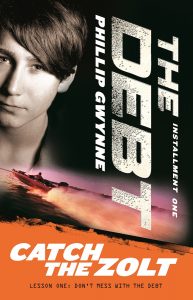 The Debt: Catch the Zolt, Installment One

In this first installment of the 6-volume action-packed thriller The Debt, middle distance runner Dom Silvagni learns that his family owes an ancient debt to a secretive and powerful organization known simply as The Debt. Now that he’s turned 15, it’s Dom’s turn to make the six installments required of each male family member by performing six Herculean tasks – or lose a pound of flesh… Each installment brings Dom a seemingly impossible challenge and he soon realizes he must figure out the master plan and extinguish The Debt for good. But who can he trust? All six installments are available now!