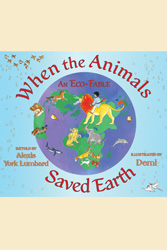 When the Animals Saved Earth: An Eco Fable

Witness the trial of the millenium: Animals vs. Humans! On a secluded island, hidden in a faraway sea, the animals live in peace and prosperity. But one day, the winds of fate bring humans to their shore.  The humans capture the animals and put them to work. A great sadness falls upon the land, and only a young boy named Adam can hear the animals’ cries.  Will Adam call upon the king to bring the humans to trial for their harmful actions? Will justice be had?  This multicultural environmental tale is inspired by a 1,000-year-old animal fable from 10th-century Muslim Iraq. The original fable was translated by a Jewish rabbi at the command of a Christian king in the 14th century.