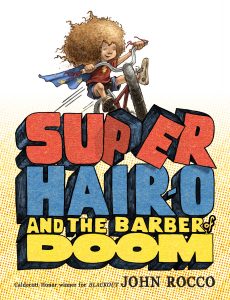 Super Hair-O and the Barber of Doom

Every super hero gets his powers from somewhere. The young hero of this book, Rocco, thinks his abilities come from his shock of red hair, and the longer it gets, the stronger he becomes. He even has a posse of super friends with wild hair of their own. Our hero is unstoppable–until the day he’s dragged to the super evil villain’s lair and robbed of his powers. How will he face his friends? Will he ever regain his super hero-ness? A girl who has been watching all along offers the gang a chance to save the day and get their groove back. With bold images that burst with energy from white backgrounds and narration as earnest as Superman himself, SUPER HAIR-O AND THE BARBER OF DOOM is a feel-good and funny book for emergent comic book fans and parents who grew up on them.