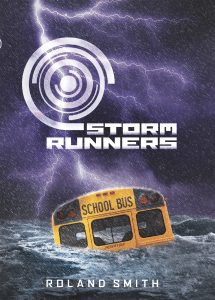 Chase and his dad are “storm runners,” traveling across the country, chasing hurricanes, tornadoes, and floods. Anywhere the Weather Channel is focused, they aren’t far behind. When disaster strikes, Chase’s dad is ready to lend a hand…and if he makes a buck along the way, that isn’t such a bad thing either. It’s an exciting life for thirteen-year-old Chase, and it definitely beats sitting in a classroom the whole school year. But in the aftermath of the hurricane of the century, Chase realizes his “disaster hunter” dad isn’t the hero he makes himself out to be. Now it’s up to Chase to do the right thing…and in the process rescue the father he once knew.
Roland Smith brings his trademark flair for action, adventure, and exciting storytelling to this new series—and it’s sure to leave young readers clamoring for more!