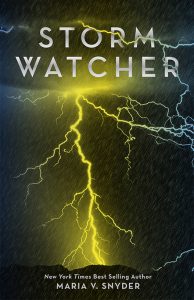 His mother’s recent death has set Luke and his family adrift. Even though his father, twin brothers, and their three bloodhounds are search-and-rescue volunteers, they have been unable to rescue themselves and become a family again.

The summer after sixth grade looms in Luke’s mind as a long, lonely three months where the only thing he can look forward to is watching the Weather Channel. Luke is fascinated with the weather, but since his mother’s death in a storm, he is also terrified. Even the promised thirteenth birthday present of a bloodhound puppy fails to lift Luke’s spirits. He would rather have a different breed – a petite papillon – but his father insists he get a bloodhound.

Luke works out a deal with Willajean, the dog breeder who owns Storm Watcher Kennel, to help her in exchange for the expensive dog. Thrilled to have a summer with a purpose, Luke befriends Willajean’s daughter, Megan, and together they plan how to get Luke a papillon puppy instead of a bloodhound. But things go wrong, and they struggle with stubborn fathers, summer storms, unhelpful siblings, and hidden guilt.