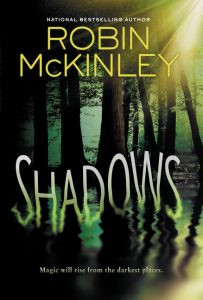 Maggie knows something’s off about Val, her mom’s new boyfriend. Not only is he from the Old World, but he’s accompanied by huge, jagged shadows that dart and slither around him. He must be practicing some sort of illegal magic. Oldworld still uses magic, but in Newworld the magic-carrying gene was disabled two generations ago, back when Maggie’s great-grandmother was a notable magician. But that was a long time ago. Then Maggie meets Casimir, the most beautiful boy she has ever seen. He’s from Oldworld too—and he’s heard of Maggie’s stepfather, and has a guess about Val’s shadows. Maggie doesn’t want to know . . . until earth-shattering events force her to depend not only on Casimir’s knowledge of magic, but on Val and his shadows. And perhaps on her own heritage.