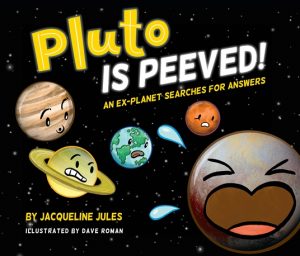 Pluto is peeved. And who can blame him? He was once considered one of the Solar System’s nine planets but was unceremoniously demoted. “Why do scientists think it is all right to change things?” Is just one question Pluto asks as he roams the science museum in search of answers.

Pluto Is Peeved!, a comic-book-style picture book, takes you on a scientific journey side-by-side with Pluto, who speaks with other museum inhabitants — such as a dinosaur, a germ, and the Earth — and learns what exactly scientists are interested in. The answer is: everything, including him!