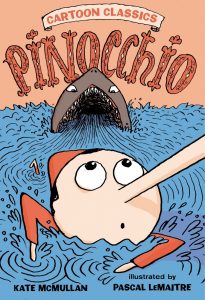 When a woodcutter discovers a piece of wood that speaks, he is quick to sell it to a poor puppet-maker named Gepetto. And Pinocchio, the walking, talking, lying puppet comes to life! Pinocchio’s adventures take him to the Field of Miracles, where a blind Cat and limping Fox trick him into giving up his money. He accidentally kills a Cricket and is later visited by its helpful ghost. He is cared for by the Blue Fairy and tricked into going to Toyland with his rambunctious schoolmates. And in the end, when his father has been swallowed by a giant shark, Pinocchio finally realizes how his ungrateful ways have hurt the person who most cared for him. As he tries to save Gepetto, he learns that being kind is the best way to repay kindness.