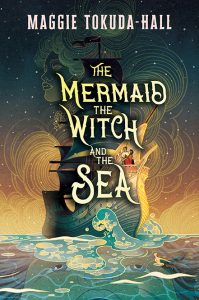 The Mermaid, the Witch, and the Sea

The pirate Florian, born Flora, has always done whatever it takes to survive—including sailing under false flag on the Dove as a marauder, thief, and worse. Lady Evelyn Hasegawa, a highborn Imperial daughter, is on board as well—accompanied by her own casket. But Evelyn’s one-way voyage to an arranged marriage in the Floating Islands is interrupted when the captain and crew show their true colors and enslave their wealthy passengers.

Both Florian and Evelyn have lived their lives by the rules, and whims, of others. But when they fall in love, they decide to take fate into their own hands—no matter the cost.

Maggie Tokuda-Hall’s sweeping fantasy debut, full of stolen memories, illicit mermaid’s blood, double agents, and haunting mythical creatures conjures an extraordinary cast of characters and the unforgettable story of a couple striving to stay together in the face of myriad forces wishing to control their identities and destinies.