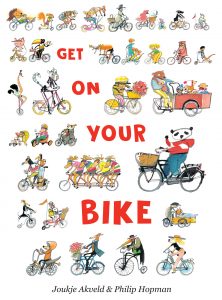 Get On Your Bike

Bobby and William aren’t quite sure how the argument started, but it escalates until William gets so frustrated he tells Bobby to leave. Bobby does just that, hopping on his bike and furiously riding away. As he travels through the city and into the country­side, though, he begins to calm down. Maybe William had a point after all? Bobby bikes back into town, hoping William will forgive him, and discovers that he’s not the only one who wants to apologize. With mesmerizing illustrations reminiscent of Richard Scarry, this vibrant book offers a sensitive, realistic portrayal of a conflict . . . and a compromise.