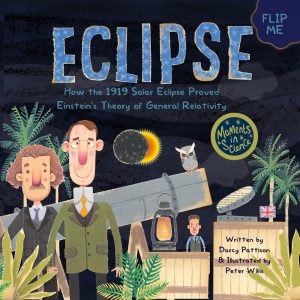 In 1915, British astronomer Arthur Stanley Eddington was fascinated with Einstein’s new theory of general relativity. The theory talks about how forces push and pull objects in space. Einstein said that the sun’s gravity could pull and bend light.
To test this, astronomers decided to photograph a solar eclipse. The eclipse would allow them to photograph the stars before and during the solar eclipse. If the star’s position moved, then it was evidence that that light had bent. Eddington and his team traveled from England to the island of Principe, just off the African coast, to photograph the eclipse.
In simple language, this nonfiction illustrated picture book explains how the push (acceleration) and pull (gravity) of space affects light.
Back matter includes information on Einstein, Eddington, and the original photograph of the 1919 solar eclipse.
“The text of the book is wonderfully clear and easy to follow, and the illustrations are great, both lively and informative. The story of the eclipse unfolds dramatically, and the science is explained vividly and correctly.” Daniel John Kennefick, Astrophysicist and Science Historian
“… Pattison takes a complicated scientific theory and makes it not just fairly understandable, but entertaining as well.” Kirkus Reviews