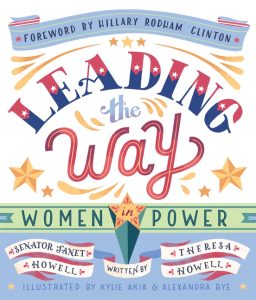 Leading the Way: Women in Power

Meet some of the most influential leaders in America, including Jeannette Rankin, who, in 1916, became the first woman elected to Congress; Shirley Chisholm, the first African-American woman elected to Congress; Sandra Day O’Connor, the first woman to sit on the Supreme Court; and Bella Abzug, who famously declared, “This woman’s place is in the House . . . the House of Representatives!” This engaging and wide-ranging collection of biographies highlights the actions, struggles, and accomplishments of more than fifty of the most influential leaders in American political history — leaders who have stood up, blazed trails, and led the way.

In this engaging and highly accessible compendium for young readers and aspiring power brokers, Virginia Senator Janet Howell and her daughter-in-law Theresa Howell spotlight the careers of fifty American women in politics — and inspire readers to make a difference.