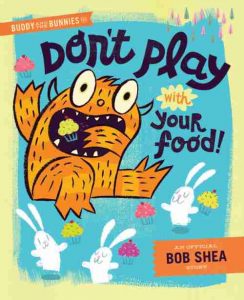 Don’t Play With Your Food

Rah! Buddy’s a monster, and he’s hungry! Time for all cute little bunnies to hop into his mouth. “Oh no!” they say. “There are cupcakes in the oven!” They offer Buddy some, and he becomes too full to eat the bunnies. He’ll have to come back tomorrow. And so it goes between Buddy and the bunnies–they take him swimming, after which he is too tired to eat; they take him on all the rides at a carnival, after which he is too dizzy to eat; they even form a Buddy fan club . . . and who could eat their own fan club? Eventually Buddy realizes that the bunnies have tricked him. The bunnies aren’t food at all–they are friends!

The bunnies’ seemingly naive offers of friendship are a charming–and clever–mode of survival in this sweet and silly story about a not-at-all-scary monster.