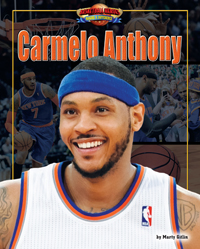 As a rookie for the Denver Nuggets, Carmelo Anthony helped lead his team to the playoffs with his outstanding scoring skills. After he was traded to the New York Knicks, he continued to shine on the court, impressing fans with an amazing 26 points per game during his first season. That’s not the only reason Carmelo Anthony is a superstar, however. When he’s not sinking shots, Carmelo is helping those in need through the Carmelo Anthony Foundation. The foundation has set up after-school programs for kids in Carmelo’s hometown of Baltimore and provided food for the hungry, in addition to building a million-dollar youth center. In Carmelo Anthony, readers will follow this NBA superstar’s basketball career and discover how he has made a difference in people’s lives both on and off the court. Large, full-color action photos and engaging text will keep readers turning the pages for more.