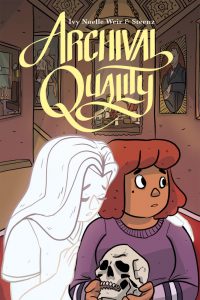 After losing her job at the library, Cel Walden starts working at the haunting Logan Museum as an archivist. But the job may not be the second chance she was hoping for, and she finds herself confronting her mental health, her relationships, and before long, her grasp on reality as she begins to dream of a young woman she’s never met, but feels strangely drawn to. Especially after she asks Cel for help…

As Cel attempts to learn more about the woman, she begins losing time, misplacing things, passing out—the job is becoming dangerous, but she can’t let go of this mysterious woman. Who is she? Why is she so fixated on Cel? And does Cel have the power to save her when she’s still trying to save herself?