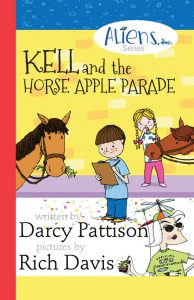 For Kell, the Friends of Police Parade is a big deal, his first Earthling parade. With Bree’s help, he must figure out how to deal with City Hall, figure out fund-raising and find superheroes and superheroines to march in the parade. To make things worse, Principal Lynx believes someone in third grade in an alien, and she has a new Alien Catcher App on her smart phone. Survival on planet Earth just got harder for the Smiths, those friendly aliens from Bix.