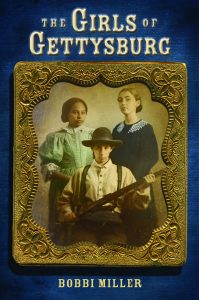 The Girls of Gettysburg

Pickett’s Charge, the suicidal assault led by Robert E. Lee on the last day of the Battle of Gettysburg, was a valiant effort but stunning defeat for the Rebel army. It serves as the powerful climax of this Civil War novel, told from the viewpoints of three girls.
Twelve-year-old Annie Gordon, disguised as a boy, sells herself as a substitute soldier and joins the Portsmouth Rifles of the 9th Virginia Infantry as they march north to Gettysburg. In Gettysburg lives fourteen-year-old Tillie Pierce, the frivolous daughter of a local merchant whose romanticized notion of war is immediately disabused when the fighting begins. Also in Gettysburg are Grace Bryan and her father, who refuse to flee with the other free blacks who fear that the rebels will arrest them as fugitive slaves.
This gripping novel follows the fates of these girls, fates that reflect the tragedies and triumphs, the humanity, heartache, and heroism of this most dreadful Civil War battle.