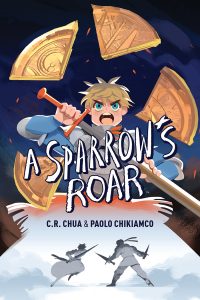 by C.R. Chua and Paolo Chikiamco

Per of Esterpike is a standard knight-in-training; brave, hardworking, noble. Oh, and her sister Elena is the nation’s most beloved hero. No pressure.

Then Per is the only living witness to Elena’s death at the hands of a barbarian horde set on wiping Esterpike off the map, and someone has to carry word to the rest of Unity. This is a job for a hero; a job for Elena. But Per is all they have.

Together with Elena’s second-in-command Amelia, Per must impersonate her sister and travel to Unity’s capital to rally the people against the oncoming horde. But as Per moves forward on her quest, she comes upon a conspiracy that could undermine everything Per, and Elena, has ever fought for.