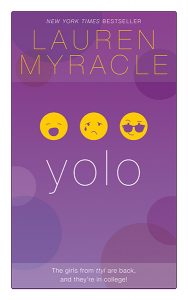 Through texts and messages, the mega-bestselling, beloved Internet Girls series followed the ups and downs of school for three very different, very close friends. Now it’s freshman year of college for the winsome threesome, and *everything* is different. For one, the best friends are facing their first semester apart. Way, way apart. Maddie’s in California, Zoe’s in Ohio, and Angela’s back in Georgia. And it’s not just the girls who are separated. Zoe’s worried that Doug wants to break up now that they’re at different schools, and Maddie’s boyfriend, Ian, is on the other side of the country.
In the face of change and diverging paths, Maddie’s got a plan to keep the friends close, and it involves embracing the present, making memories, and . . . roller derby! Using of-the-moment technology, Lauren Myracle brings her groundbreaking series into the brave new virtual world of texting and tweets.