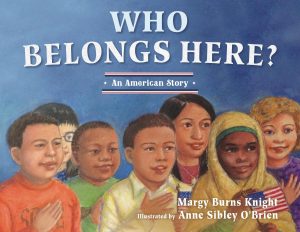 Who Belongs Here?: An American Story

Who Belongs Here? tells the story of a boy who, having been forced to flee his war-torn country, struggles to be accepted by his new classmates in the U.S. Some kids think he should go back where he belongs, but what if everyone whose family came from another place was forced to return to his or her homeland? Who would be left? A new introduction traces the waves of immigration that have built America and celebrates the Muslim and Latino immigrants who are today contributing to America’s future. The book’s new cover shows a group of kids―sons and daughters of newly arrived immigrants–taking their oath of citizenship. This story is more timely now than ever. In this probing, plain-spoken book, based on a true story, Margy Burns Knight and Anne Sibley O’Brien, author and illustrator of the acclaimed “Talking Walls,” invite young readers to explore the human implications of intolerance. Anecdotes relating the experiences of other refugees and their contributions to American culture play counterpoint to Nary’s tale, all enlivened by O’Brien’s full-color pastels. A compendium at the end of the book offers more detailed information about Pol, Pot, Ellis Island, and other topics in this text.