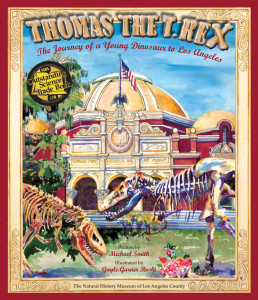 Through the eyes of Thomas and Rita, young readers learn about the T. rex and how dinosaurs lived, as well as the basics of excavation and the preparation of fossils for their public debut in the Museum’s new Dinosaur Hall, opened July 2011.

The book features actual photographs from the 2003 – 2005 excavation of Thomas, led by world-renowned paleontologist and exhibit lead curator, Dr. Luis Chiappe at the Museum’s Dinosaur Institute.

Thomas the T. rex ranks among the 10 most complete T. rex worldwide, is on a permanent exhibit at the new Dinosaur Hall of the Natural History Museum of Los Angeles County (NHMLA). Families and kids can get up close to the 34 feet long Thomas and learn more about the science of dinosaur and fossil discovery at the NHMLA.