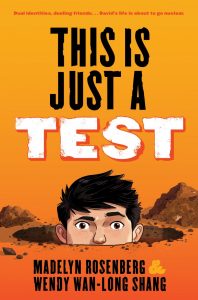 This Is Just a Test

Madelyn Rosenberg and Wendy Wan-Long Shang tell the story of a boy caught in the middle of cultures, of friends, and of growing up Chinese-Jewish-American in this hilariously witty and heartwarming coming-of-age novel.

David Da-Wei Horowitz has a lot on his plate. He would have enough to do preparing for his upcoming bar mitzvah even if the planning didn’t involve trying to please both his Jewish and Chinese grandmothers, who argue about everything. They even have a cook-off battle of the latkes. But David just wants everyone to be happy.

That includes his friend Scott, who is determined to win their upcoming trivia tournament but doesn’t like their teammate — and David’s best friend — Hector. Scott and David begin digging a fallout shelter just in case this Cold War stuff with Russia turns south, but David’s not so convinced he wants to spend forever in an underground bunker with Scott anymore. Maybe it would be better if Hector and Kelli Ann came with them. But that would mean David has to figure out how to stand up for Hector and talk to Kelli Ann first. Some days, surviving nuclear war feels like the least of David’s problems.