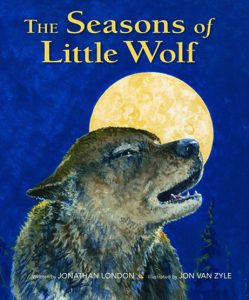 The Seasons of Little Wolf

The creators of The Eyes of Gray Wolf (1993) bring the same close intimacy
to this sequel-a chronicle of a cub’s eventful first year. Thanks to the
illustrations’ low angle of view, readers practically become members of the
pack. Little Wolf and his three littermates are born in spring, bumble out
of the cozy den for playtime in the warm months of summer, and then in
autumn, join parents Gray Wolf and White Wolf on a hazardous first hunt.
London likewise invites children to think of the wolves as practically
human: Little Wolf and his sibs “chow down” by nipping Gray Wolf’s muzzle
after he returns from a hunt. (London leaves the exact mechanism of delivery
ambiguous, which may cause readers to believe that Gray Wolf has just
carried a mouthful of meat home to the cubs.) The cubs also play
“tug-of-war” and “hide-and seek” until things get too wild and White Wolf
imposes a “wolf’s time-out.” Still, for all the attentive parenting, close
family ties and social nature on display here, the wolves are not
anthropomorphized. Respectful and informative, with dashes of humor and
drama.