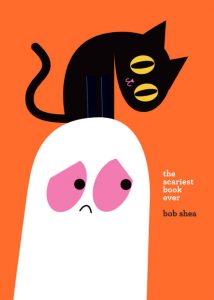 The Scariest Book Ever

Reader beware! This is the scariest book ever! Or so claims its melodramatic ghost narrator. You can go ahead and turn the page, but don’t expect him to come with you. Anything might pop out of that black hole in the middle of the forest. What do you mean it’s just a bunny? Well, it’s probably a bunny with big fangs. Watch out, it’s–picking pumpkins with its friends, you say? Actually, despite the ghost’s scare-mongering, none of the animal characters in the illustrations seem scary at all. What’s up with that?