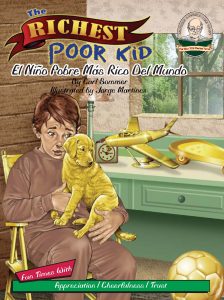 Randy was a poor young boy with an old problem. Everything he had was old. His rich neighbor Mike had a new bike and new toys, and he constantly teased Randy. Randy desperately wished he was rich so he could buy everything new. He was warned by those around him that riches alone don’t bring happiness, but Randy never listened. To Randy’s great delight, his wish came true! Everything he touched turned into gold, even his beloved dog. As he held his lifeless gold dog, he realized he was now the most miserable kid in the whole world. Remembering he had one more wish, he used it to have things return as before. His wish came true, and it became the happiest day of his life. Now when Randy went to school, he held his head high. When he rode his old bike, he often said, I’m sure glad my bike isn’t made of gold!