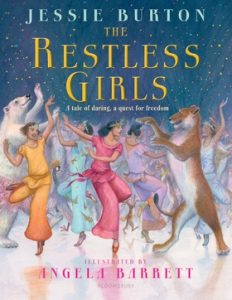 For the twelve daughters of King Alberto, Queen Laurelia’s death is a disaster beyond losing a mother. The king decides his daughters must be kept safe at all costs, and for the girls, those costs include their lessons, their possessions, and most importantly, their freedom.

But the sisters, especially the eldest, Princess Frida, will not bend to this fate. She still has one possession her father cannot take: the power of her imagination. And so, with little but wits and ingenuity to rely on, Frida and her sisters begin their fight to be allowed to live on their own terms.

The Restless Girls is a sparkling whirl of a fairy tale–one that doesn’t need a prince to save the day, and instead is full of brave, resourceful, clever young women.