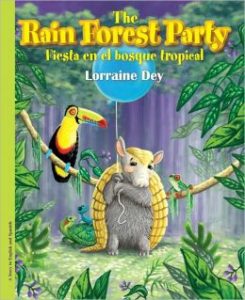 Hector–Armando was a little Armadillo who wanted to find his special talent that he could share with his friends at the big rain forest party. As he walked into the forest he noticed his friends were all busy collecting things and practicing their own talents to get ready for the big party. As he came upon his many friends, he would try to do the same things they were doing, but he just wasn’t fast enough, or his legs were too short, or he wasn’t tall enough. He tried again and again, but became sad to realize he may not have any special talents.

He curled up to hide and suddenly became aware of a hidden talent that was there all along. Something mother nature gave him but he forgot about. He would share a very special talent with friends at The Rain Forest Party.