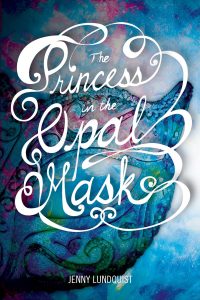 The Princess in the Opal Mask

When a secret connection is exposed between teenage sisters who were separated from birth—one raised as a princess and the other an orphan—they are forced to switch lives. Orphaned as a child in the crumbling village of Tulan, Elara is determined to learn her true identity, even if it means wielding a dagger. Meanwhile, in Galandria’s royal capital, Princess Wilha stands out as someone to either worship or fear. No one knows why the king has always made her conceal her face—including Wilha herself. When an assassination attempt threatens the peace of neighboring kingdoms, Elara and Wilha are brought face to face . . . with a chance at claiming new identities. Both go through big transformations. When Wilha realizes her gift for bringing people together and Elara discovers her knack for being a leader, they pull their strengths together. However, with dark revelations surfacing, both girls will need to decide if brighter futures are worth the binding risks.