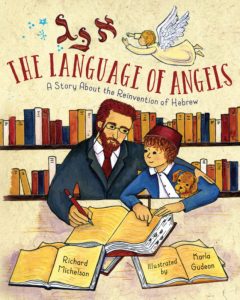 The Language of Angels: A Story About the Reinvention of Hebrew

In 1885, few Jews in Israel used the holy language of their ancestors, and Hebrew was in danger of being lost–until Ben-Zion and his father got involved. Through the help of his father and a community of children, Ben modernized the ancient language, creating a lexicon of new, modern words to bring Hebrew back into common usage. Historically influenced dialogue, engaging characters, and colorful art offer a linguistic journey about how language develops and how one person’s perseverance can make a real difference.