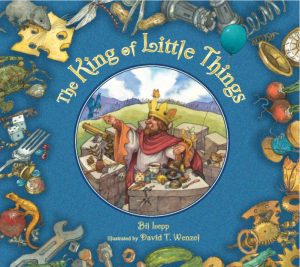 The King of Little Things

In a long ago world of vast kingdoms lives a king who happily reigns over all things small. He has all he needs and doesn’t want for more. Not so King Normous. He wants to be Ruler of All the World. He gathers his armies and soon he has erased every empire and raided every realm. Or has he? Normous is enraged to learn that the King of Little Things still rules over his tiny kingdom. He sends his army to defeat this upstart, but he finds he cannot outfight or outwit a king who holds sway over the small things of the world. After all, it is the small things that keep the big things going.