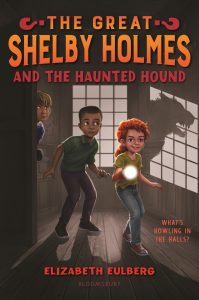 The Great Shelby Holmes and the Haunted Hound

Now infamous in their Harlem neighborhood for solving the most difficult mysteries, super sleuths Shelby Holmes and John Watson stumble into their creepiest case yet. Residents of a local apartment building are hearing scary noises at night, like screams, scratching, and an unearthly dog’s howl. It can’t be a ghost . . . Can it?

Well, Shelby Holmes doesn’t believe in ghosts, and she plans to prove they don’t exist! But Watson can’t help but wonder if there are more supernatural forces at work–especially after he and Shelby hear rumors that the building’s previous owner, Hugo Baskerville, and his loyal hound haunt the premises.

If Shelby and Watson want to find out who (or what!) is behind the spookiness, they’ll have to prove they’re not afraid of ghosts–by surviving an overnight Halloween stakeout!

Elizabeth Eulberg’s charming middle-grade take on Sherlock Holmes continues in this retelling of The Hound of the Baskervilles that reunites readers with the charming detective pairing of Shelby and Watson.