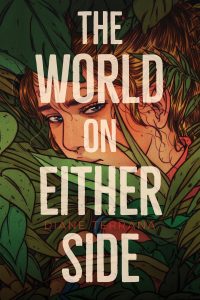 The World on Either Side

Sixteen-year-old Valentine is devastated by the death of her boyfriend in a high-school football game. She stops going to school, quits seeing her friends and won’t leave her bed. After Valentine’s accidental drug overdose, her desperate mother takes her on a jungle trek in Thailand. In the mountains north of Chiang Mai, Valentine meets Lin, a young elephant keeper with a mysterious past. After stumbling on an elephant massacre, Valentine and Lin find themselves running for their lives with an orphan calf they vow to save. In the safety of their growing friendship, Lin speaks of his dark past as a child soldier, kidnapped into the brutal Burmese army. He confesses to acts that Valentine isn’t sure she can forgive. As she digs deep for compassion, Valentine is forced to confront herself. With newfound courage, she faces a choice: to hide from life forever or become who she wants to be.