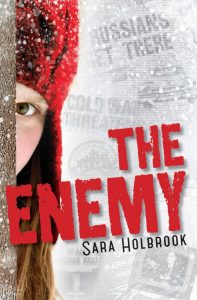 Set in 1954, this compelling historical novel tells the story of a young girl’s struggles and triumphs in the aftermath of World War II. The war is over, but the threat of communism and the Cold War loom over the United States. In Detroit, Michigan, twelve-year-old Marjorie Campbell struggles with the ups and downs of family life, dealing with her veteran father’s unpredictable outbursts, keeping her mother’s stash of banned library books a secret, and getting along with her new older “brother,” the teenager her family took in after his veteran father’s death. When a new girl from Germany transfers to Marjorie’s class, Marjorie finds herself torn between befriending Inga and pleasing her best friend, Bernadette, by writing in a slam book that spreads rumors about Inga. Marjorie seems to be confronting enemies everywhere—at school, at the library, in her neighborhood, and even in the news. In all this turmoil, Marjorie tries to find her own voice and figure out what is right and who the real enemies actually are. Includes an author’s note and bibliography.