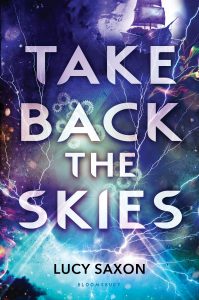 Take Back the Skies

Desperate to escape an arranged marriage and the life her high-ranking government official father planned for her, Cat Hunter does the unthinkable. She runs away from her homeland Tellus, disguises herself as a boy, and stows away on an air ship. She’s ready for life in a new land where the general population isn’t poverty stricken and at the mercy of the cruel officials. What she isn’t quite ready for is meeting Fox, a crew member aboard the Stormdancer—which turns out to be a smugglers’ ship. So begins an epic adventure that spans both land and sea.

This explosive debut starts a unique six-book series. Each novel will be set in a different land within the Tellus world, with repeating characters and related, nonlinear storylines that combine to create a one-of-a-kind, addictive reading experience.