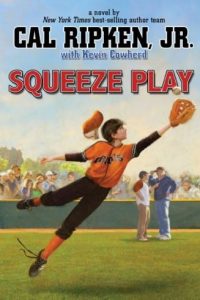 In the fourth book in Cal Ripken, Jr.’s All-Star series, centerfielder Corey Maduro has to deal with the humiliation of having an overly involved father in the stands.

Corey Maduro should be thrilled about the Orioles going to the big Grand Slam Tournament. But whenever he thinks about playing, he feels sick. For one thing, he’s in a monster hitting slump, which shows no signs of ending. Then there’s Katelyn Moss, who thinks she deserves Corey’s center field job and tries to outdo him at everything.

But Corey’s biggest problem is his dad, who turns into a howling, wild-eyed maniac at his son’s games. Joe Maduro ridicules the other team, gets in shouting matches with parents, and screams at the umps when calls don’t go the Orioles’ way. It’s so embarrassing Corey wants to crawl into a hole—except Katelyn would probably dig a better hole and make him feel worse.

With Squeeze Play, the best-selling team behind Hothead, Super Slugger, and Wild Pitch delivers another funny and action-packed home run.