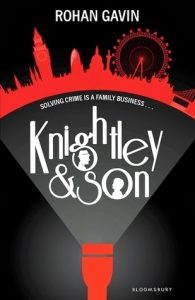 The once highly in-demand detective Alan Knightley has just woken up after an unexplained incident kept him asleep for four years. While he was out cold, his son, Darkus, took it upon himself to read of all his dad’s old cases, and he’s learned a lot about the art of detection. It’s a good thing too—because suddenly the duo find themselves caught up in a crazy conspiracy that involves a group of villainous masterminds (who keep appearing and then vanishing), some high-speed car chases (that will have everyone fastening their seat belts), and a national, bestselling book with the power to make people do terrible, terrible things. But because Alan is still suffering the effects of his coma, he tends to, well, fall asleep at the worst possible moments, Meaning that young Darkus might just have to solve this mystery . . . by himself.