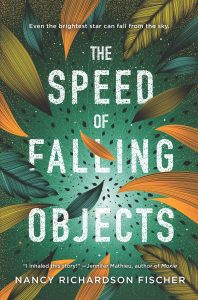 If you hitch a ride on someone else’s star, you’ll never shine as bright…

Danielle “Danny” Warren lost her eye and her father when she was seven—the eye to an accident and her father to his TV survival show, COUGAR, which has kept him away for most of the past ten years. Living with her single mom, and nicknamed Pigeon by bullies for the jerky head movements she used to make while adjusting to her altered depth perception, Danny is thrilled when her dad invites her to be on his wildly popular show alongside intimidatingly gorgeous teen movie idol Gus Price, even though the extreme situations her dad loves terrify her.

When their small plane crashes in the Amazon rain forest, Danny and the survivors follow her father’s lead to stay alive. But after learning the terrible secret about her dad’s motive for bringing Danny on the show, she must face the truth about the father she worships, the lies she’s embraced and her feelings for Gus. As everything around her falls apart, can Danny follow her own star to light the way home?