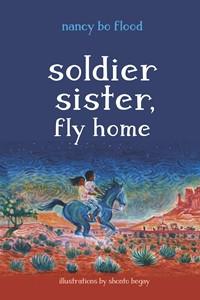 Thirteen-year-old Tess and her sister Gaby are as close as sisters can be, or at least they were. But then Gaby enlisted in the Army, and soon after that she was deployed to Iraq. And this on the heels of the death of their friend Lori, the first Native American woman to die in combat on foreign soil.

When Gaby asks Tess to take care of Blue, her beloved but headstrong horse, Tess is furious—about being left behind with a horse she doesn’t trust and about the danger Gaby is facing. And Gaby was the only one who understood Tess’s problem: on the Rez Tess wonders if she’s Navajo enough, and at school in Flagstaff, she’s singled out as the “Indian girl.”

A touching coming-of-age story that invites readers into Tess’s bicultural world and the universal struggles of growing up. Flood draws thoughtfully from her experience living for fifteen years in the Navajo Nation. Cover illustrations and chapter decorations by Navajo artist Shonto Begay round out this lyrical middle-grade story.