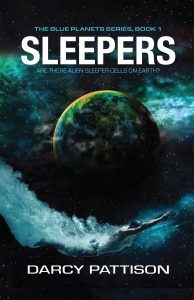 THE BLUE PLANETS WORLD SERIES
Earth finally receives a message from space:
“You only live on land. Allow us to live in the seas.”

Rison will implode soon. They desperately need a new blue planet, a water planet. But Earth is crowded. Will humans be able to open their hearts to an alien race?

Could there be alien sleeper cells on Earth?
A test-tube baby, fifteen-year-old Jake Rose is half human and half alien; he has both lungs and gills.
He’s been raised on the “other blue planet,” Rison. However, in a horrifying science-gone-wrong scenario, Rison will soon implode. He evacuates to Earth to live with his human father’s parents on Bainbridge Island in Puget Sound. His mother, Dayexi Quad-de is Rison’s ambassador to Earth. She’s tasked with finding Risonians a new home on Earth in a peaceful manner.

Jake accidentally discovers that Earth’s elite ELLIS forces are trying to sabotage Mt. Rainier by starting an eruption so that they can blame it on the Risonian aliens. Working to thwart them, Jake suddenly realizes his mother—the ambassador—is missing.

Sleepers is the first novel in the action-packed science fiction The Blue Planets World series. This classic teen novel of finding your place in society combines with thrilling science fiction that delivers a punch. If you like the intrigue and excitement of Ender’s Game or I Am Number Four, you’ll love Darcy Pattison’s science fiction series of survival among the galaxies.