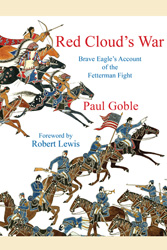 The year was 1866, the Civil War had just ended, and the Bozeman Trail was the shortest route for prospectors to reach the gold rush territory of Montana—except that it passed straight through the lands of the powerful Oglala Lakota! When the US government demanded the construction of forts along the trail, the situation quickly dissolved into war. Captain William Fetterman had proudly boasted that he could destroy the entire Lakota nation with just 80 men. Red Cloud, with the support of Crazy Horse and Sitting Bull, had other ideas. In this commemorative edition, marking the 150th anniversary of Red Cloud’s War, Goble recounts the tale of events through the eyes of Brave Eagle, a fictional young Lakota warrior.