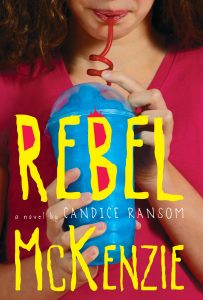 Rebel McKenzie wants to spend her summer attending the Ice Age Kids’ Dig and Safari, a camp where kids discover prehistoric bones, right alongside real paleontologists. But digs cost money, and Rebel is broker than four o’clock. When she finds out her annoying neighbor Bambi Lovering won five hundred dollars by playing a ukulele behind her head in a beauty contest, Rebel decides to win the Frog Level Volunteer Fire Department’s beauty pageant. Rebel may not be a typical pageant contestant, but how hard can it be? Rebel’s dramatic reading about life is the Pleistocene era is sure to blow away the competition. It turns out that winning a beauty pageant is harder than it looks. By the end of the summer, Rebel has learned a thing or two about her true calling that will surprise everyone–most of all, herself