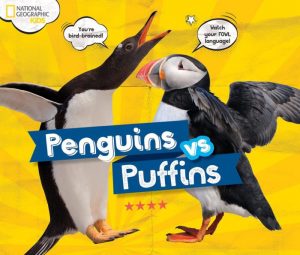 Get ready for an epic battle of ultimate cuteness. In one corner, there’s Team Penguin. In the other, Team Puffin! Which team will you be rooting for in this hilarious and adorable smackdown? Tune in to the sports match, complete with cheeky animal commentators, as penguins and puffins square off for quirky superlatives such as Most Graceful (sure you don’t mean “most awkward”?), Highest Flyer (oops, penguins can’t fly! I guess they lose this round!), Scariest Arch Nemesis (hint: don’t ever say “gull” to a puffin!), Most Photogenic, Biggest Science Magnet — and that’s just the tip of the iceberg!
This book is also loaded with all sorts of animal knowledge: the history of the species, how they raise their young, the latest science about each, population numbers, range maps, fun facts, quizzes, and more. By the time you’re done reading, you’ll be a mini-expert on both animals!