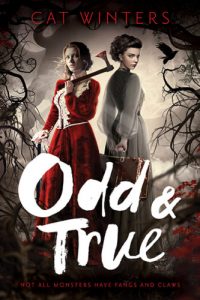 A dark Edwardian adventure involving corseted heroines, deadly beasts, and the war between reality and imagination. Odette and Trudchen are sisters known as Od and Tru. Younger sister Tru, a girl with a leg crippled from polio, has grown up with her older sister’s stories of a monster-slaying mother and a father who disappeared because of because of a magician’s curse. But she’s come to believe that these stories are Od’s way of protecting her from the grim truth of the history of her family.

In 1909, Od reappears in Tru’s life after a two-year absence, claiming to have been sharpening the monster-hunting skills she inherited from their mother. With a suitcase packed full of weapons and a book cataloging America’s deadliest supernatural creatures, Od encourages Tru to journey across the country with her to conquer the notorious Leeds Devil, a nightmare of a beast that’s wreaking havoc in the Mid-Atlantic states. Od agrees to follow her sister on the adventure, mainly to keep an eye on Od’s precarious hold on reality and to unearth the truth behind their family’s fantastical stories. What Tru finds along the way is the peculiar possibility that she and her sister—two inconsequential young ladies in high-buttoned blouses and lace petticoats—might, indeed, possess the power to save the world.