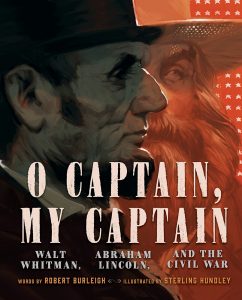 Dramatic, lyrical, and beautifully illustrated, O Captain, My Captain tells the story of one of America’s greatest poets and how he was inspired by one of America’s greatest presidents. Whitman and Lincoln shared the national stage in Washington, DC, during the Civil War. Though the two men never met, Whitman would often see Lincoln’s carriage on the road. The president was never far from the poet’s mind, and Lincoln’s “grace under pressure” was something Whitman returned to again and again in his poetry. Whitman witnessed Lincoln’s second inauguration and mourned along with America as Lincoln’s funeral train wound its way across the landscape to his final resting place. The book includes the poem “O Captain! My Captain!” and an excerpt from “When Lilacs Last in the Dooryard Bloom’d,” brief bios of Lincoln and Whitman, a timeline of Civil War events, endnotes, and a bibliography.