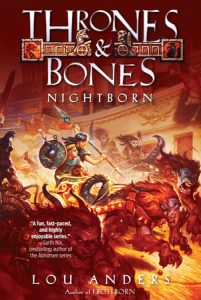 The second book in the acclaimed fantasy-adventure Thrones and Bones trilogy!

Twelve-year-old Desstra is in training to join the Underhand, the elite agents of the dark elves. But her graduation is jeopardized by the betrayal of a teammate. Things go from bad to worse when she is sent far from home on a secret mission, under the supervision of this same rival, whose approval she must win if she is to graduate and realize her life’s dream.

Karn is trading in the city of Bense, when he is snatched into the air by a wyvern. The creature carries him across the wilderness straight to the Blasted City, to Sardeth, home of the dragon Orm. Is Karn about to be a dragon’s dinner?

Fate doesn’t have anything so easy in store for him. The great dragon tells Karn he believes a second Horn of Osius exists, hidden across the continent in the city of Castlebriar. What’s more, Orm has previously sent Thianna Frostborn on a mission to recover the horn, but her wyvern returned without her. It seems Thianna has run afoul of the dark elves. Now Karn must rescue his friend and together they must uncover the horn before the dark elves get ahold of this powerful relic.

With only a dragon’s blessing to aid them and a mysterious riddle to guide them, Karn and Thianna must race the dark elves to a prize that could alter the fate of nations.