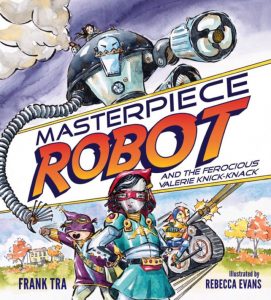 It may look like an ordinary backyard… but MASTERPIECE ROBOT knows better…Heading into the backyard with her little sister Molly on a bright October afternoon, Laura ponders the next plot twist in the sci-fi story she has been writing. She imagines the two of them as Masterpiece Robot and Sidekick, patrolling the outskirts of a dystopian city to guard against interplanetary raiders. Then older sister Amber – aka the Ferocious Valerie Knick-Knack – throws a handful of fallen leaves at them, launching a desperate battle for survival. In the story within the story, a suburban backyard becomes a futuristic battleground, and Laura and her siblings become heroes and villains. Perhaps the real question in MASTERPIECE ROBOT is not who will win this life-or-death fight for a planet’s future, but when Laura’s first major film will be produced.