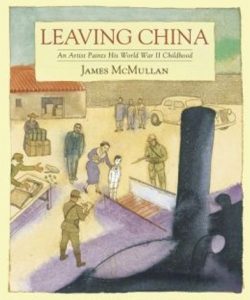 James McMullan is an internationally acclaimed illustrator whose work has appeared in virtually every national magazines, on the posters for seventy Lincoln Center theater productions, and in a bestselling series of picture books created with his wife, Kate McMullan (I Stink, I’m Dirty). Uniquely told through fifty original paintings paired with text, this remarkable memoir explores McMullan’s early childhood in China and his journey to America during World War II. Leaving China has received amazing trade reviews – in a starred Booklist called it “exquisite…a fascinating, seamless portrait of a young life and the wartime world,” Kirkus praised it’s “vivid clarity and quiet strength,” and illustrator and author Peter Sis said: “Who knew that behind all those wonderful watercolors I have admired since coming to New York are all these magic memories of childhood? It is like finding pearls inside unexpected shells.”